But I Don’t Feel Too Old to Be a Mommy!: The Complete Sourcebook for Starting (and Re-Starting) Motherhood Beyond 35 and After 40 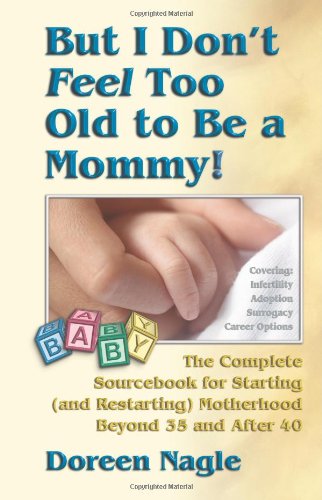 ‹   Back to About Adoption

But I Don’t Feel Too Old to Be a Mommy!: The Complete Sourcebook for Starting (and Re-Starting) Motherhood Beyond 35 and After 40

Categories: About Adoption, How to Adopt, Making the Decision.

The traditional childbearing ages for women have been 20-29. Today, however, the trend to later childrearing is significant, with the numbers of mothers over the age of 35 having grown 75 percent in the last decade, while the numbers in the traditional ages continue to decline. From celebrities to the woman next door, later childrearing is no flash-in-the-pan fad “and isn’t going to subside; future trends only show women will continue to delay motherhood,” according to the National Center for Health Statistics.

But I Don’t Feel Too Old to Be a Mommy! is the first and only book to fully address the concerns of the ever-growing but greatly ignored audience of literate, educated women who have delayed motherhood. In this comprehensive work, women who are considering parenting in their 30s, 40s and later-whether for the first time or starting over-will find all the information they need to make informed choices.

Author Doreen Nagle, herself a first-time mom over 40, details the risks, rewards, rumors and resources-from making the decision to start a family, to every imaginable way to get there, to the realities of motherhood beyond 35 and 40. Issues covered include infertility, pregnancy, surrogacy, adoptions, the pros and cons of later motherhood, single parenting, and financial and career considerations. Complete with quotes from medical experts, later-in-life moms and their kids, this one-stop book will calm the doubts and fears of women considering motherhood after 35 and beyond 40 by providing supportive yet realistic information.