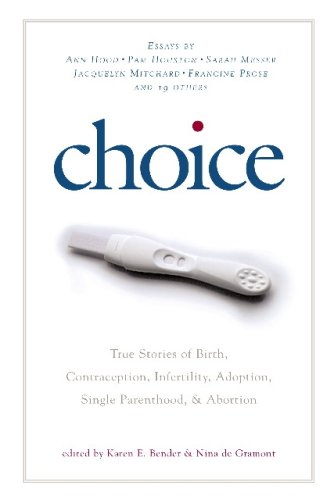 CHOICE explores the one of the most polarizing political issues of our time reproductive choice.

CHOICE attempts to raise the discourse on reproductive choice, which often devolves to clichÃ©s and name-calling, by posing the question–what is it like to make any sort of reproductive choice? What is it truly like to use birth control, the morning after pill, use a sperm bank, have an abortion, adopt a child, give a child up for adoption, bring a pregnancy to term?

In these 22 stunningly honest essays, writers describe their experiences making some of these decisions, as well as many others. Established writers such as Francine Prose, Jaquelyn Mitchard, Pam Houston, Carolyn Ferrell, Ann Hood, Deborah Macdowell, and Sarah Messer contribute essays, along with emerging writers such as Kimi Faxon Hemingway, Stephanie Anderson, and Ashley Talley.

The essays in CHOICE explore the complexities inherent in every reproductive decision, whether it is to choose to have a child or terminate a pregnancy; the guiding philosophy of the book is that this issue is too complex and individual to be legislated, and the writers honesty about their experiences will humanize this issue, no matter what the reader s stand on it.