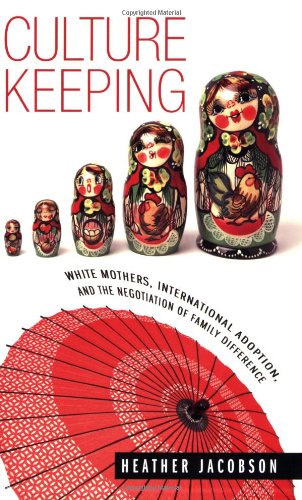 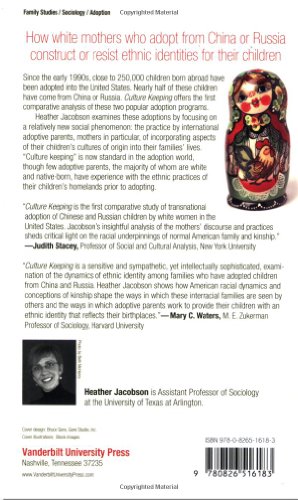 Since the early 1990s, close to 250,000 children born abroad have been adopted into the United States. Nearly half of these children have come from China or Russia. Culture Keeping: White Mothers, International Adoption, and the Negotiation of Family Difference offers the first comparative analysis of these two popular adoption programs.

Heather Jacobson examines these adoptions by focusing on a relatively new social phenomenon, the practice by international adoptive parents, mothers in particular, of incorporating aspects of their children’s cultures of origin into their families’ lives. “Culture keeping” is now standard in the adoption world, though few adoptive parents, the majority of whom are white and native-born, have experience with the ethnic practices of their children’s homelands prior to adopting.

Jacobson follows white adoptive mothers as they navigate culture keeping: from their motivations, to the pressures and constraints they face, to the content of their actual practices concerning names, food, toys, travel, cultural events, and communities of belonging. Through her interviews, she explores how women think about their children, their families, and themselves as mothers as they labor to construct or resist ethnic identities for their children, who may be perceived as birth children (because they are white) or who may be perceived as adopted (because of racial difference).

The choices these women make about culture, Jacobson argues, offer a window into dominant ideas of race and the “American Family,” and into how social differences are conceived and negotiated in the United States.