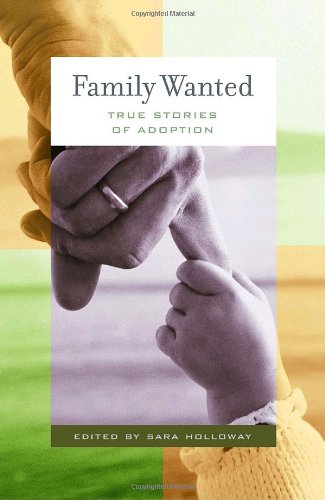 ‹   Back to Adoptee Memoirs

Adoption, until recently a hidden subject, has become an open field of psychological study, policy debate, and ethical interest. Family Wanted is an honest, heartwarming, and heartbreaking collection featuring important authors personally involved in all sides of adoption. Here are more than twenty pieces, many published for the first time. Among the contributors are Paula Fox, an adoptee herself, who meets the daughter she didn’t raise and finds she is “the first woman related to me I could speak to freely”; Bernard Cornwell, adopted by a now-defunct religious cult, who responds by converting to “atheism and frivolity”; African author Hannah wa Muigai, who recounts being impregnated as a teenager by an older lover–whom she then found in bed with another man; Tama Janowitz, who to her comical shock learns to love the “hyperactive sweating lunatic” she adopted in China; and Daniel Menaker, who as an adoptive father becomes less concerned with the cause-and-effect of heredity and more content with “the lottery that to a large extent is everyone’s life.”

“Gripping . . . [Family Wanted] pulls the reader through [a] variety of emotions. . . . Some families work, others don’t. This anthology does.”
–The Guardian (London)