How It Feels to Have a Gay or Lesbian Parent: A Book by Kids for Kids of All Ages (Haworth Gay and Lesbian Studies) 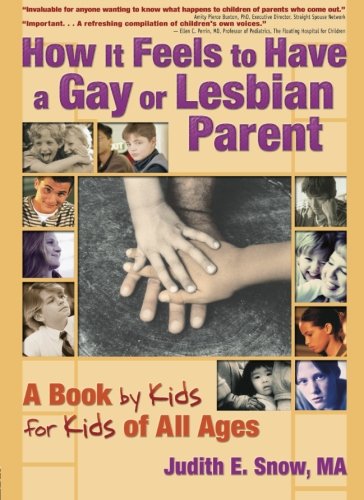 ‹   Back to Children's Adoption Books

How It Feels to Have a Gay or Lesbian Parent: A Book by Kids for Kids of All Ages (Haworth Gay and Lesbian Studies)

Sometimes I fantasize about having a magic wand. How awesome it would be to wave it and completely eliminate prejudice, hate, and ignorance. Just imagine what it would be like to live in a world like that. How It Feels to Have a Gay or Lesbian Parent: A Book by Kids for Kids of All Ages gives voice to the thoughts, feelings, and experiences of children, adolescents, and young adults who have a gay or lesbian parent. In their own words, they talk openly and candidly about how and when they learned of their parent’s sexual orientation and the effect it had on them and their families. Their stories echo themes of prejudice and harassment, conflict and confusion, adaptation and adjustment, and hope for tolerance and a family that can exist in harmony. ‘Because it’s an issue for other people, it becomes an issue for me. I’m angry about the way it works against me’ The stories told in How It Feels to Have a Gay or Lesbian Parent not only reflect the day-to-day struggle of children with a GLBT parent, they also reveal the pain inherent in high-conflict divorce and child custody cases. Children of gay/lesbian parents ranging in age from seven to 31 recall the confusion and grief created when the disclosure of their parent’s true sexual orientation ended a marriage and divided a family. The “straight” parent’s resentment can lead to angry remarks that intentionally or unintentionally disparage the gay/lesbian parent and threaten the natural love and affection the child feels for both. “I guess the hardest part about having a gay dad is that no matter how okay you are with it, there’s always going to be someone who will dislike you because of it” The one-on-one interviews presented in How It Feels to Have a Gay or Lesbian Parent document first-hand the effects of homophobia on family life. Children struggle with the choice between living in a closet, shamed by peers and family members, or dealing with discrimination as a pa