Identical Strangers: A Memoir of Twins Separated and Reunited 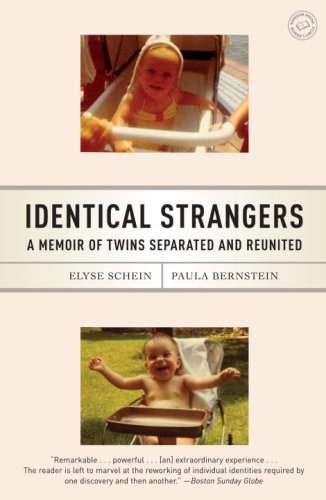 Identical Strangers: A Memoir of Twins Separated and Reunited

As seen in the hit documentary Three Identical Strangers • “[A] poignant memoir of twin sisters who were split up as infants, became part of a secret scientific study, then found each other as adults.”—Reader’s Digest (Editors’ Choice)

WINNER OF A BOOKS FOR A BETTER LIFE AWARD

Elyse Schein had always known she was adopted, but it wasn’t until her mid-thirties while living in Paris that she searched for her biological mother. What she found instead was shocking: She had an identical twin sister. What’s more, after being separated as infants, she and her sister had been, for a time, part of a secret study on separated twins.

Paula Bernstein, a married writer and mother living in New York, also knew she was adopted, but had no inclination to find her birth mother. When she answered a call from her adoption agency one spring afternoon, Paula’s life suddenly divided into two starkly different periods: the time before and the time after she learned the truth.

As they reunite, taking their tentative first steps from strangers to sisters, Paula and Elyse are left with haunting questions surrounding their origins and their separation. And when they investigate their birth mother’s past, the sisters move closer toward solving the puzzle of their lives.

“Remarkable . . . powerful . . . [an] extraordinary experience . . . The reader is left to marvel at the reworking of individual identities required by one discovery and then another.”—Boston Sunday Globe

“[A] fascinating memoir . . . Weaving studies about twin science into their personal reflections . . . Schein and Bernstein provide an intelligent exploration of how identity intersects with bloodlines. A must-read for anyone interested in what it means to be a family.”—Bust

“Identical Strangers has all the heart-stopping drama you’d expect. But it has so much more—the authors’ emotional honesty and clear-eyed insights turn this unique story into a universal one. As you accompany the twins on their search for the truth of their birth, you witness another kind of birth—the germination and flowering of sisterly love.”—Deborah Tannen, #1 New York Times bestselling author of You Just Don’t Understand