International Adoption: Global Inequalities and the Circulation of Children 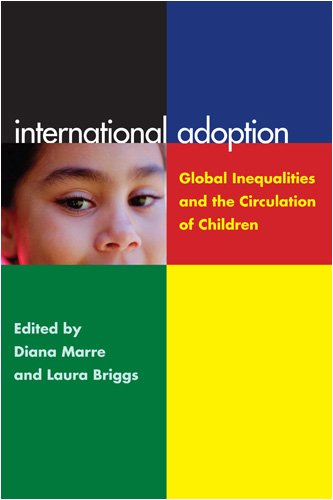 ‹   Back to Adoption/Foster Care Counseling

International Adoption: Global Inequalities and the Circulation of Children

In the past two decades, transnational adoption has exploded in scope and significance, growing up along increasingly globalized economic relations and the development and improvement of reproductive technologies. A complex and understudied system, transnational adoption opens a window onto the relations between nations, the inequalities of the rich and the poor, and the history of race and racialization, Transnational adoption has been marked by the geographies of unequal power, as children move from poorer countries and families to wealthier ones, yet little work has been done to synthesize its complex and sometimes contradictory effects. Rather than focusing only on the United States, as much previous work on the topic does, International Adoption considers the perspectives of a number of sending countries as well as other receiving countries, particularly in Europe. The book also reminds us that the U.S. also sends children into international adoptions particularly children of color. The book thus complicates the standard scholarly treatment of the subject, which tends to focus on the tensions between those who argue that transnational adoption is an outgrowth of American wealth, power, and military might (as well as a rejection of adoption from domestic foster care) and those who maintain that it is about a desire to help children in need.