Outsiders Within: Writing on Transracial Adoption 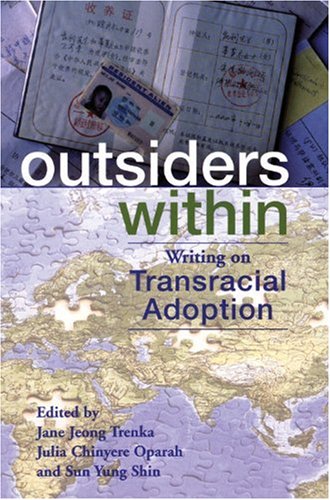 Outsiders Within: Writing on Transracial Adoption

Given Madonna’s recent decision to adopt a child from Malawi, news and entertainment are abuzz with what you’ve observed yourself—in your own family, or the family next door, or passing the neighborhood playground—there’s a boom in transracial adoption. Most coverage focuses on the struggles of good white parents wishing to adopt “unfortunate” children of color. Some touches on the irony of Black babies in the United States being exported to Canada and Europe because of their “unwanted” status here. Some even addresses the trafficking of children (of course, it would—that’s sensational). But few look at

Healthy white infants have become hard to locate and expensive to adopt. So people from around the world turn to interracial and intercountry adoption, often, like Madonna, with the idea that while growing their families, they’re saving children from destitution. But as Outsiders Within reveals, while transracial adoption is a practice traditionally considered benevolent, it often exacts a heavy emotional, cultural, and even economic toll.

Through compelling essays, fiction, poetry, and art, the contributors to this landmark publication carefully explore this most intimate aspect of globalization. Finally, in the unmediated voices of the adults who have matured within it, we find a rarely-considered view of adoption, an institution that pulls apart old families and identities and grafts new ones.

Moving beyond personal narrative, these transracially adopted writers from around the world tackle difficult questions about how to survive the racist and ethnocentric worlds they inhabit, what connects the countries relinquishing their children to the countries importing them, why poor families of color have their children removed rather than supported—about who, ultimately, they are. In their inquiry, they unseat conventional understandings of adoption politics, ultimately reframing the controversy as a debate that encompasses human rights, peace, and reproductive justice.

There are no reviews yet.

Only logged in customers who have purchased this product may leave a review.