The Baby Boon: How Family-Friendly America Cheats the Childless 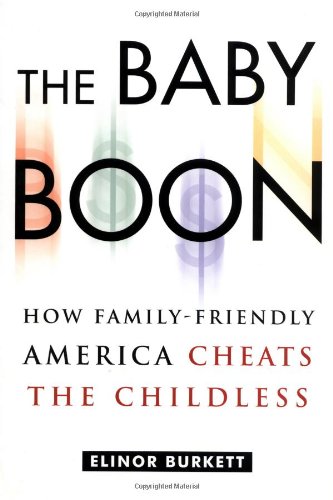 ‹   Back to Assisted Reproduction Technology

The Baby Boon: How Family-Friendly America Cheats the Childless

Who stays late at the office when Mom leaves for a soccer match? Whose dollars pay for the tax credits, childcare benefits, and school vouchers that only parents can utilize? Who is forced to take those undesirable weekend business trips that Dad refuses? The answer: Adults without children — most of them women — have shouldered more than their share of the cost of family-friendly America. Until now. “Equal Pay for Equal Work” is one of the foundations of modern American work life. But workers without children do not reap the same rewards as do their colleagues who are parents. Instead, as veteran journalist Elinor Burkett reveals, the past decade has seen the most massive redistribution of wealth since the War on Poverty — this time not from rich to poor but from nonparents, no matter how modest their means, to parents, no matter how affluent. Parents today want their child and their Lexus, too — which accounts for the new culture of parental privilege that Burkett aptly calls “the baby boon.” Burkett reports from the front lines of the workplace: from the hallowed newsroom of The New York Times to the floor of a textile factory in North Carolina to a hospital in Boston. She exposes a simmering backlash against perks for parents, from workers who are losing their tempers and fighting for their rights. She spells out how tax breaks for families with six-figure incomes are not available to childless people earning half as much. And she tells the dramatic story of how pro-family conservatives and feminists became strange bedfellows on the issue of pro-family rights, leading to an increase in workplace and government entitlements for parents — at the same time as the childless poor lost their public benefits. Americans are on a demographic collision course between the growing numbers of mothers in the workforce and the swelling ranks of a new interest group: childless adults. Armed with hard data and grassroots reporting, Elinor Burkett points the way to a more equitable future. With an inside look at what some companies are already doing to redress the grievances of childless workers and a hard assessment of what the truly needy — children and adults — require in order to survive, Burkett fires the first shot in the
Tax credits, childcare benefits, school vouchers, flextime for parents, parental leaves–all have spawned what journalist Elinor Burkett calls a “culture of parental privilege.” The Baby Boon charts the backlash against this movement and asks for a reevaluation of social policy. Burkett’s cause isn’t served by her sarcasm, which leads so easily to exaggeration and strained humor. She proposes, for example, that there exists an unwritten but widely understood “Ten Commandments of workplace etiquette in family-friendly America,” which includes items such as “Thou shalt volunteer to work late so that mothers can leave at 2:00 p.m. to watch their sons play soccer” and “Thou shalt never ask for a long leave to write a book, travel, or fulfill thy heart’s desire because no desire other than children could possibly be worth thy company’s inconvenience.” Burkett is more convincing when citing real-life examples, such as a legal secretary who applied for flextime and was told that benefit was available only to parents, or the case of Sarah, a childless travel agent in Seattle who invented a fake daughter, put her picture on her desk at work, and proceeded to take long lunches (“trips to the pediatrician”) and leave work early for “family emergencies.” Ironically, as Burkett describes, it was the search for equity that inspired the various pro-parent benefits of the “family-friendly workplace.” A new attention to childless workers does seem to be in order–permitting them to substitute some benefits for others, for instance, or to receive bonuses instead, and to work in environments that support their choices not to have children. –Regina Marler