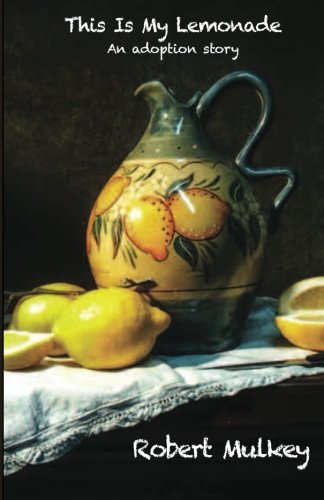 Earlier this year, Tapestry Books added the adoption memoir “This is My Lemonade: An Adoption Story” by Robert Mulkey. Hear from the author himself below!

“Relatively few books have been written by adult adoptees about the adoption journey. This book discusses my lifelong experience. It attempts to bring some sort of perspective for everyone involved in the adoption equation by sharing such miscellaneous issues as identity, acceptance and forgiveness.

I never set out to be an author. Virtually everyone who heard my story over the years gave me the same response—“You should write a book”. The process wasn’t easy and it did take some time. Every day I would ask myself how would I get this done or where do I even start. And some friends would ask me things like, how to promote your book and I had no idea. But with time, research and determination, I knew a book was something worth writing. In everyone else’s eyes, my experience was unique and fascinating, something I never considered.

My journey started in 1977, when adoption was still shrouded with embarrassment and gaucherie. Neither I nor my adoptive or biological family knew what we were getting into. There were no seminars, psychological studies or how-to books about meeting one’s biological family. We were in uncharted waters, writing rules only for ourselves that would be re-written over the decades as adoption became mainstream with celebrities openly touting their newly adopted children.

It was my desire to write my story for those people involved in adoption—primarily adult adoptees who might not have any reference point or perspective about the finding one’s biological family. This book covers thirty-four years, more than half my life and took me from a quiet, suburban existence in Salem, Oregon to an internationally-spiced identity with trips to British Columbia and Italy.

Recently, I have moved to Italy to become immersed in my Italian culture and become closer to my extended family. Relocation is never easy and this instance was no different. It was a big shock to the system. It also cost a lot of money, way more than I predicted. Although, that wasn’t helped by the fact that I was rejected for a mortgage because of my lack of credit in Italy. I knew how to solve that if I was moving to the U.S. (more info on that) but didn’t have a clue when leaving the U.S. Anyway, in the end I was ok and I don’t regret a thing as my relocation has also allowed me to travel to Ukraine and Poland to do additional genealogical research on my biological mother’s family.

Since my book has been published, I’ve heard from numerous people who are not in the adoption community who were impacted by my story. Their response has been heartening and inspiring. This book is merely my experience with all the warts and frailties of human relationships along with the celebrations and blessings. If one person is touched in some way by my story, then it was all was worth it.”

Here is a brief excerpt from “This is My Lemonade”:

“Adopted by an Oregon family as an infant, Robert Mulkey was eighteen years old when he first learned the details of his birth family–including the brother he always dreamed of having. ‘This is My Lemonade’ chronicles the amazing story of his thirty-four year quest to know his birth family, learn of his roots, and find his identity, traveling first to British Columbia and eventually to the ancestral family home near Ascoli Piceno in central Italy. It is a journey filled with transcendent moments and agonizing heartbreak, leading finally to acceptance, understanding and the genuine love of family.”

“This is My Lemonade” by Robert Mulkey is now available on Tapestry Books! Learn more by clicking here.