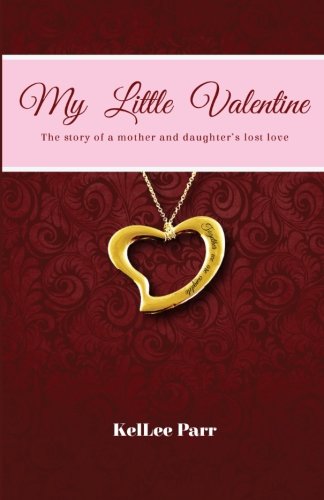 “KelLee Parr, the author of My Little Valentine, was blessed being raised in a loving, rural Kansas farm family. Starting with his maternal grandmother who was raised by her grandparents, adoption was just a natural part of KelLee’s family. After not seeming to be able to have children, his grandparents adopted a baby boy in 1920. And as often happens, his grandmother became pregnant soon after and had another boy. They went four years without having another child and so they adopted KelLee’s mother, Wanda. Once again his grandmother immediately became pregnant and had a girl. Two years later she gave birth to a third daughter. They were a close knit family with never a mention or distinction made of natural versus adopted children. Interestingly, both of KelLee’s aunts also adopted sons.

Wanda always wanted to know more about her birth mother and the huge piece of her life that was missing. It haunted her. She loved her parents and family dearly, but she still wanted to know who she was and why she was given up for adoption. She feared she might hurt her adopted parents’ feelings if they knew. They were “Mom” and “Dad” and nothing would change that, but she still yearned to know about her birth mother and searched often to no avail.

Knowing how badly his mother wanted to learn about her background, KelLee began a secret search of his own in 1991 to find information about his birth grandmother. With what he believes is divine intervention and some extremely good luck, KelLee found his mother’s birth mother still alive at the age of 83. Though it took 66 years, Wanda was blessed to find the answers she had needed. She built a relationship with the woman who had to promise at the age of 17 to never look for her baby girl. It was a wonderful reunion that brought out many hidden secrets, opened some old wounds, and brought healing and love that was thought lost forever. Wanda and her birth mother were both comforted that the heartache and most difficult decision made so many years ago had been best for Wanda.

Over the years, KelLee was encouraged by several friends and family members to write down the story. They said it needed to be shared to encourage other adoptees to look for their birth parents and find some closure if they have questions. One special friend and co-worker, Margaret Heisserer, was a huge contributor to pushing KelLee to write. Her son, Eric Heisserer, is a writer and has written screen plays. Margaret encouraged Eric to write from an early age. Over several years, KelLee would work a little on My Little Valentine with Margaret’s continued encouragement to keep writing. She told him she knew a special story when she read one and this was one needing to be told.

In the fall of 2015, KelLee found in an old chest hundreds of letters that his mother had received and saved from her birth mother over the 14 years they had together. After reading these letters, KelLee knew he needed to finish writing this book to give hope to other adoptees who have questions about their background, health history, and heritage. Searching for a birth parent or a child given up for adoption is scary and not always a happy ending. There are some extremely sad stories shared by adoptees that were rejected by their newly found birth parents or siblings. For adoptees trying to decide whether to search, KelLee knew he needed to let others know there are positive relationships that come from searching and finding birth parents. These touching letters KelLee found from his grandmother to his mother convinced him he needed to share their story in case there are others questioning and wondering if there ever is a happy ending.

KelLee has had many different career opportunities and never been one to pass up a challenge or try something new. Upon graduating from Kansas State University, he worked as an agricultural and literacy missionary in Guatemala. After returning home to Kansas, he worked as a county extension agricultural and 4-H agent before deciding to return to college and get a degree to teach middle school. Much to his surprise, opportunity led him to become a third grade teacher. After several years of teaching, he took a leave from teaching to train teachers how to successfully use a math and phonics program that had benefited his own students. After four years of traveling and visiting schools all across the country, KelLee returned to the classroom and again taught 3rd grade and became a Reading First literacy coach. He also worked as an adjunct university professor teaching an Elementary Science Methods course to prospective teachers. Currently, KelLee works with a company that writes science curriculum for elementary students.

KelLee has started writing on a book about The Willows Maternity Sanitarium, the facility where his mother was born. He is also working on an autobiography about his experiences during the three years spent in Guatemala. He currently resides in Manhattan, Kansas, where he loves his K-State Wildcats and the beauty of the Flint Hills.”