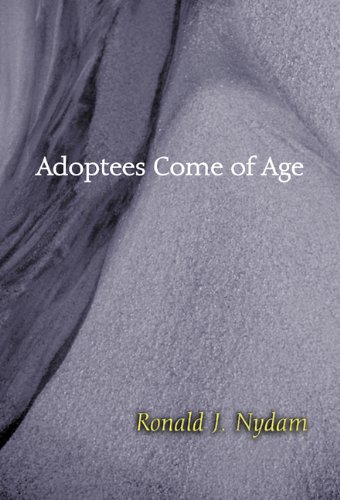 This book draws off of ideas presented in several other books, such as Nancy Newton Verrier’s concept of a “primal wound” in adopted children and the notion of a “Ghost Kingdom” in Betty Jean Lifton’s book “Journey of the Adopted Self.” Nydam, using these ideas and through the true stories of actual adoptees, attempts to understand the complex situations of relinquishment and adoption.

This book is heaviliy supported with facts and logical theories into the world of adoptees. However, Nydam does include a spiritual aspect in Adoptees Come of Age. One chapter of the eight is completely devoted to the spirituality of adoptees, titled “Adoptees and God: A Variety of Images.” Despite this clear religious context, Nydam approaches the discussion from a counseling or therapeutic standpoint. He suggests that just like all people, adoptees question the ideology of God unique to their own experience. He questions how and to what extent does an adoptee’s relinquished past affect their spirituality.

The book “Adoptees Come of Age” is filled with true accounts of adoptees, which are juxtaposed with Nydam’s explanation of each situation. Although the general subject of the inner world of adoptees remains consistent throughout the book, each chapter brings new, insightful passages that develop understanding of the adoptee’s world.
If you are interested in reading “Adoptees Come of Age” by Ronald J. Nydam, you can order it at Tapestry Books!